Photographed in February when the weather was at it’s coldest this winter – these Heroes were troopers to get out outside AND to put on glittery, teal heels to raise money for Coastal Horizon’s Rape Crisis Center. It was a wonderful experience meeting and photographing four of the twelve heroes: Matt Monroe, Chip Munna, Lance Oehrlein and Hal Campbell!

To the Heroes, Coastal Horizons and everyone who contributed their time and donations – THANKS for supporting a worthwhile cause! 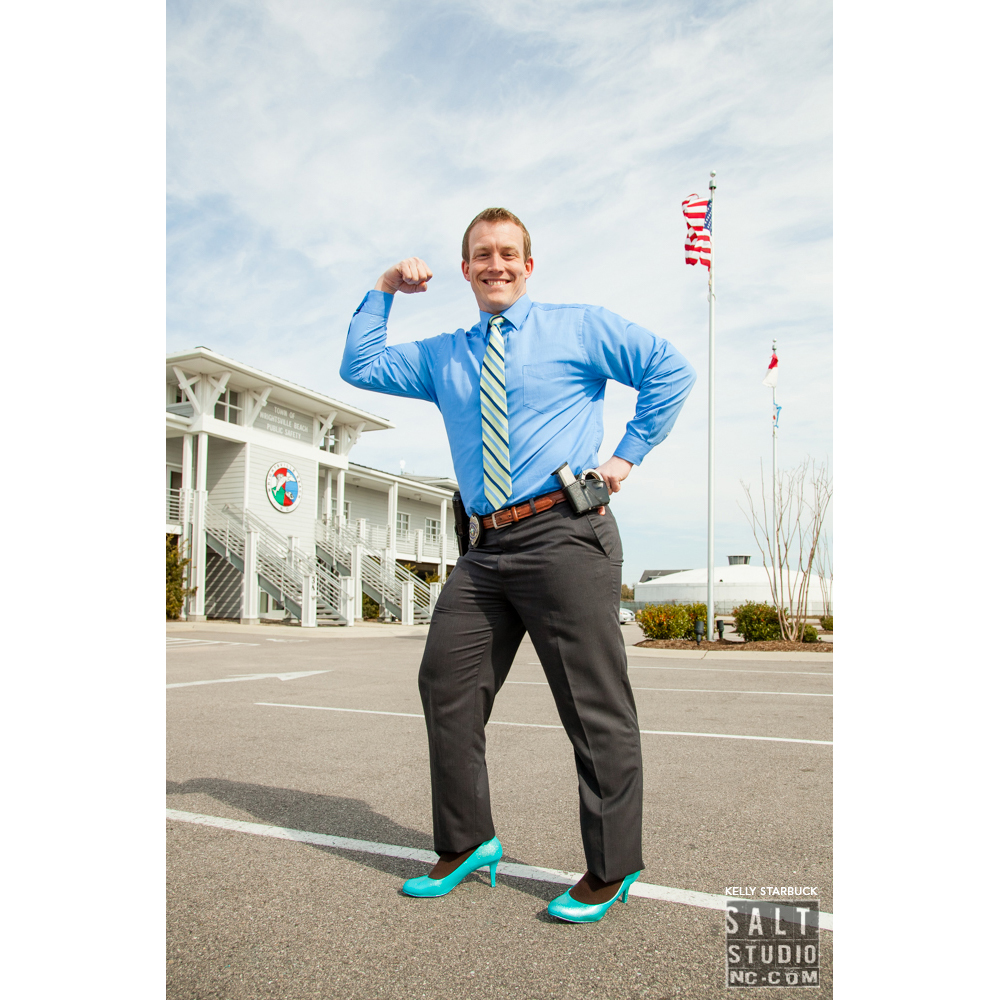 Wrightsville Beach Police Department Investigator Matt Monroe’s coworkers could not pass up the opportunity for a photo shoot when Monroe sported a pair of sparkly teal heels at the Wrightsville Beach Public Safety Building one cold winter day. Monroe is waiting for the day when the photos they snapped with their cell phones resurface.

“I knew that I would receive a bit of people laughing and taking pictures on the side, and that’s fine,” Monroe said. “I’m sure it will come up again in the future.”

Monroe is one of a dozen local men who donned teal heels, the color of sexual assault awareness, for a photo shoot with one of four local photographers. After the pictures were posted online March 9, the men began spreading the word through social media, asking family, friends, and friends of friends to cast a vote, at a minimum cost of $10, in his name for the 2015 Heroes in Heels campaign, organized by the Rape Crisis Center (RCC) of Coastal Horizons Center.

Like his coworkers, Monroe said he laughed a little when the idea was first pitched to him, but he instantly knew he would accept the invitation to participate.

“I have a lot of respect for the Rape Crisis Center and the people who work there, and I definitely believe in what they’re doing. I wanted to help out any way that I could,” Monroe said.

While serving as a new spin on the Walk A Mile In Her Shoes fundraisers the center has organized in the past, the campaign also provides a more accessible way for the community to engage with the center’s mission, explained Jamie Thompson, Coastal Horizons Center development director.

“It can be difficult to start a conversation about the work we do, but this is a unique way to start learning a little bit about the work done here in town for survivors of sexual violence,” Thompson said. “We’re shaking it up. You’re not used to seeing a man wearing high heels, and that’s why I think it’s such a great way to start the conversation. You see that picture of Matt Monroe, and he’s a tall, in-shape guy with his badge and gun, and there he is wearing sparkly teal heels. When you click on his bio, you see the incredible work he’s doing to catch these perpetrators of sexual violence and support survivors through that process.”

The campaign shows a network of people throughout the community who work together to help victims of sexual assault in hospitals and counseling centers, at crime scenes and in courtrooms.

“We wanted to highlight the work they do, because you don’t always hear about it. But we have these amazing heroes and this team at RCC who are working to support survivors, to prosecute perpetrators and ultimately eradicate sexual violence and the things that cause it,” Thompson said.

The photos were fun and informative to create for those behind the scenes as well.

“I definitely have a newfound respect for anyone who wears heels,” Monroe said.

After traveling to Wrightsville Beach and posing with his surfboard on the walkway at Public Beach Access No. 4 for his picture, Lance Oehrlein, assistant district attorney who prosecutes all sexual crime cases in New Hanover County, squeezed in some time on the water.

“It gave me an excuse to go to the beach in the middle of February, and the waves were good that day, so I ended up going surfing after the photo shoot,” Oehrlein said.

Oehrlein, who raised more $1,000 during the first week his photo was online but claims he is “definitely not a social media butterfly,” said he is happy to help raise awareness of sexual assault within and beyond the local community.

“I’m getting texts and emails and Facebook posts from people that I know from all over the world, and I’m getting comments from people I don’t even know. It’s really cool. They’re not all donating, which is fine, because even if they don’t donate, it raises awareness for a good cause,” Oehrlein said.

Voting, which raised more than $6,000 in its first week, continues through March 26, when the winner will be crowned and caped during a 5 p.m. rally at Riverfront Park in downtown Wilmington.

To see the photos and vote for the 2015 RCC Hero in Heels, visit www.crowdrise.com/heroesinheels/