What’s in an image? It’s a quandary every photographer must ask herself. For local photographer Kelly Starbuck, nostalgia and family (of any degree) have emerged as recurring themes in her work. Turn back the hands of time to one year ago, and she unveiled not only her fresh, new photography studio and gallery, SALT (805 North 4th Street), she also debuted her exhibit “Family Shrine.” The fine-art photo series captured her longing for home (Starbuck is a Wilmington native and graduate of New Hanover High School) while she lived and worked in NYC. 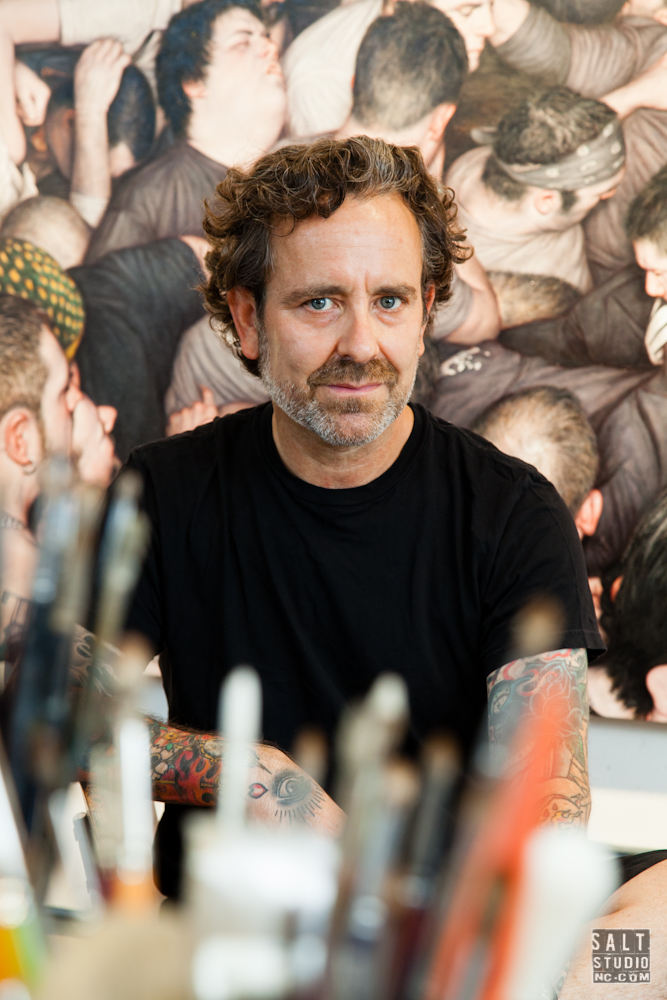 Now, 12 months into business, Starbuck’s work has come full circle. She has premiered a new series, dubbed “SALT STUDIO: Year One,” just last Friday—to a turnout of 100-plus people. The collection celebrates her first year in operation and even harkens back to her NYC days.

Starbuck’s love of photography began at an early age. A visually geared mind, combined with her grandfather’s propensity for being a “shutterbug,” led her to make an interesting request on her Christmas list at age 10: a Polaroid camera.

“All of the film was used up by lunch,” Starbuck says with a laugh. “I had various cameras and took snapshots throughout life as a passion, but didn’t really consider photography as a profession until I realized that if I didn’t make a go of it, I would regret it later in life.”

After working as a corporate events producer, Starbuck made the transition to the photo industry in 2003. Her first job was as a studio manager for Fernando Bengoechea. It wasn’t long before she also began working as a teaching assistant at the International Center of Photography.

Having worked in the industry for over 10 years and moving back to Wilmington in 2009, SALT Studio truly has become Starbuck’s home. “I was ready for my photography business to move to another level and to have a studio where I could offer clients the option of studio- or location-based photography services,” Starbuck details. “When I found the space, it easily lent itself to have a small gallery, and I always wanted to curate photography shows. So it was a perfect fit. The first year has been great and I have learned a lot.”

Starbuck beams over her accomplishments: SALT Studio has hosted the likes of husband-and-wife duo Scott Irvine and Kim Meinelt for their “Waxenvine” exhibit (Irvine is even depicted in a New York-minded photo from “SALT STUDIO: Year One.” The “Secrets & Lies” production team bought the prints for set decoration. As well, SALT has hosted international photographer Leeta Harding.

“Probably the biggest name was Christopher Rauschenberg, son of famed painter Robert Rauschenberg,” Starbuck comments. “His ‘Studio’ exhibition was a great draw for artists of all mediums.”

The real standout from SALT has been the sense of community that’s blossomed. More so, Starbuck’s evolution as a photographer, is evident in “SALT STUDIO: Year One.” “Mostly, [it’s] the theme of relationships,” she says. “My artist, musician and actor portraits was the biggie. These were ideas I had for a while and finally pushed myself to work on this body of images. Many of these people are great friends, and the feeling I got after putting that wall of images up was, ‘Wow! I love having these awesome people here with me (many live in NYC) and I don’t want to take this wall down in a month because I will miss them.’”

Starbuck’s work covers an array of editorial, commercial, private client, portrait and fine-art photography (“Bokeh Nights”) that she has amassed since conceptualizing SALT. With each photo she passes, she exudes a distinct sense of familial love. She can recall how she knows each person, their story and even how the depicted individuals know each other.

One of her favorites is a portrait of artist Dan Witz, who has showcased his photo realism internationally and was the cover artist for this month’s Juxtapoz Magazine. It comes as part of a collection that features artists in their workspace.

“I love how he is nestled between his paint brushes and a large-scale painting he created for his ‘NY Hardcore’ exhibition,” Starbuck describes of the Brooklyn-based painter.

The show also boasts a sweaty, hard-rocking image of pop-rock band GROUPLOVE that she took after a concert they performed at the Cat’s Cradle in Chapel Hill. She’s known the band members since her time in New York. “Bokeh Nights” fine-art photography collection also reminisces of her New York days. Comprising blurred neon lights that epitomize the larger-than-life brightness of the city, the photographs were captured locally through light reflected off the Cape Fear River and the USS Battleship when it was lit over Christmas.

The story examined three pairs of jeans that could be worn both uptown and downtown. The cover image, which features Kelly Tada, was shot with natural lighting to add accent to the minimal cement wall behind her. “She just looks awesome!” Starbuck adds.

A series of black-and-white photos Starbuck did for Oliver Earney’s CPA firm, as part of an interior-design project, are also on display. “One of my favorites is a group of trees at Fort Fisher. The trees don’t look like they are here at all—more like Africa,” Starbuck says.

Monday – Friday   12:00pm – 5:00pm
Saturday & Sunday by appointment
SALT Studio is a working photography studio and business. Please call ahead (910.367.5720) to confirm the gallery is open and that we are not on location for a photo shoot. Appointments welcome!

A series of abstract nighttime images is one of several styles featured in Kelly Starbuck’s exhibition “SALT Studio: Year 1.” Photo by Kelly Starbuck

In December of 2013, the Gallery at SALT Studio set up shop at 805 N. Fourth St. with the ambition of introducing Wilmington to the photography of local, regional, national and international artists as the area’s only fine arts gallery dedicated solely to camera work.

A year and a month later, the Gallery at SALT Studio presents “SALT Studio: Year 1,” a collection of photographs shot by SALT owner and resident photographer Kelly Starbuck during her studio’s inaugural year.

The exhibition opens with a public reception 6 to 9 p.m. Jan. 23 in coordination with Fourth Friday Gallery Night, a monthly, self-guided art crawl throughout downtown Wilmington’s studios and art galleries. Fourth Friday is organized by the Arts Council of Wilmington and New Hanover County.

“It’s interesting to see how just starting this business, and having an actual brick-and-mortar space has pushed me to a different place with photography,” Starbuck said. “I’m still in a way working freelance, but it just put me in a different place to where I did get some referrals and opportunities that came my way that weren’t really happening before.”

In the past year, Starbuck produced editorial work for magazines like Focus on the Coast and Wilmington Magazine; created a series of abstract, nighttime images; and compiled an extensive portfolio of expressive portraiture, shot with her approach of framing in close on her subjects, but not too close.

“When I want to do a formal portrait of somebody,” Starbuck said, “I always go in waist up, and I want to fill it tight, almost fill the frame. But give them a little bit of head space. Sometimes I will come in closer, but it’s just a good distance, I feel like, that kind of shows the person and their personality, and maybe a little bit of attitude.”

Monday – Friday   12:00pm – 5:00pm
Saturday & Sunday by appointment
SALT Studio is a working photography studio and business. Please call ahead (910.367.5720) to confirm the gallery is open and that we are not on location for a photo shoot. Appointments welcome!